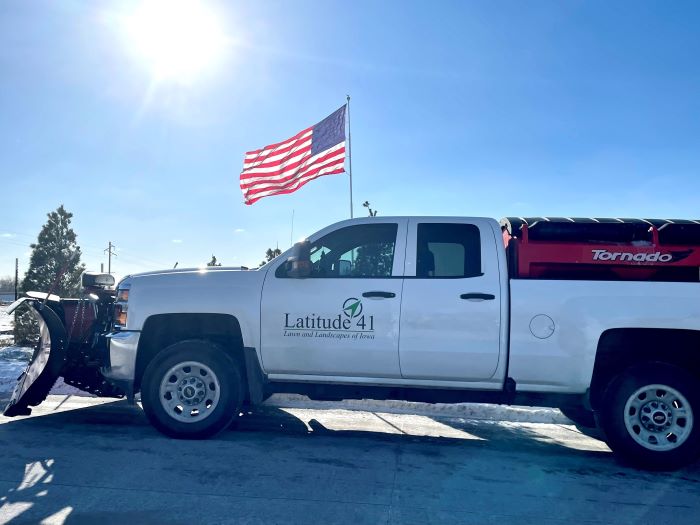 Austin Hurst didn’t start his career in landscaping, but he’s found his place in the industry.

After years of working part-time at Latitude 41 Lawn and Landscapes of Iowa and a stint in finance at Wells Fargo, Austin joined Latitude 41 full-time in 2018.

As the vice president and director of business operations at Latitude 41, he’s putting his degree in business management to work and making decisions that will grow the company. “I wanted more personal satisfaction in my career,” he explains. “Even if I was just a bigger part of something small, I wanted to have the reward of seeing something grow. Now I’m getting to do something I'm passionate about that I really enjoy, with people that I enjoy doing it with.”

Latitude 41 was founded in 2015 by Jake Snook, a high school friend of Austin’s. The company is based in Ankeny, Iowa, outside of Des Moines, and offers mowing, landscaping, fertilizing, irrigation, tree work, and snow removal services to 70% commercial/HOA and 30% residential clients.

In 2018, the business consisted of Jake completing landscaping jobs and Austin running the business operations. The pair recruited another former classmate from a local landscape company to run the mowing operation, and the company has steadily increased its full-time roster to 11 employees through employee recommendations and acquaintances. With seasonal employees, Latitude 41 employs 24 people during the peak of the busy season.

“We've got good people, and we've made an emphasis on just wanting to bring in the right people to build this thing the right way. We want to continue to grow, and we know that we're capable of it,” says Austin.

A simple and feasible solution

When Austin joined the company in 2018, he knew that they needed to improve their operations and increase revenues. Replacing the spreadsheets and Google apps they were using to record their financial data and keep track of their schedules was messy and ineffective.Yet cost and functionality were their main concerns for potential new solutions.

“The software we were looking at was [designed] for much bigger companies than we were. They just didn't make sense for us, whether it was price or how difficult it was to use,” Austin says.

By chance, Austin came across Crew Control at the Lawn & Landscape Technology Conference in 2019. David Vroblesky, Crew Control’s senior product manager, was busy demonstrating the solution for another landscape company at the time, so David’s father stepped in to show Austin some basic features.

“I say that David’s dad must be some sort of sales genius, because I could tell that he wasn’t totally familiar with the product, but he was able to work it and use it,” Austin laughs. “It just showed me how simple (Crew Control) was, and I was immediately interested. And it doesn’t cost us $500 a month. It's something that's very simple that’s feasible for our business."

To see for yourself how Crew Control can help you track your crews and manage labor better, click here for a free 14-day trial.

“I view it as a complete success by everybody on the team because you got to have guys that can sell and keep that customer relationship,” he says. “And then you've also got to have great guys that do the work and do a good job and allow you to capitalize on that. So I'm proud of that, just because it was a combined team effort. And not only that, but we well surpassed it.”

The team has improved a variety of areas in their business with the visibility and structure that Crew Control has helped them create. Here are a few:

Managing work schedules at Latitude 41 used to consist of writing on paper calendars, then shifting to using Google calendars and apps. Both options proved to be inconsistent and ineffective, especially when the company would realize months later that they forgot to bill a service.

Crew Control has centralized the schedule so now the entire company can see all jobs instantly and no longer has to guess if they have the capacity to take on jobs. “What I really love about Crew Control is just being able to schedule that work so you can actually tell how far booked out you are and know how much you can really take on,” he explains.

The simplicity of Crew Control has created plenty of personal growth, responsibility, and accountability among the growing team, he says, with crew members running their own departments using the solution. Crew leaders report for work and review the scheduled and unscheduled jobs in the administrator portal of Crew Control in the company laptop in the shop.

“Every department is self-sufficient. These guys come in and they know what they're doing every day, and we're not having to micromanage or tell them what to do,” Austin says. “It's very user-friendly, and they can utilize it, drag, click, and do everything that they need to do.”

Crew Control provides Latitude 41 with an accurate log of hours from when crews park the truck to when they clock out, Austin says. They use the system to double check the schedule and ensure they have accurate dates and labor hours when billing or reconciling hours with clients as well.

He adds that it’s easy to maximize the crew’s time and fill any open space on the schedule. Once a job is sold, the team enters the job in Crew Control for scheduling. Crews can instantly see any unassigned jobs on the schedule board and quickly add it to their schedules if they have the time. This is especially helpful during the snow season when the company can quickly dispatch jobs to their six or seven crews, including subcontractors.

“We’re leaning on Crew Control and making sure that we can take on the most work that we can to maximize the revenue that we're bringing in for that department. That's my probably biggest objective this year,” says Austin.

Learn how Crew Control can help you optimize routes and maximize your crew schedules. Talk to a Crew Control industry expert today.

In addition to understanding their schedule capacity, Crew Control helps the company connect the dots between their labor hours and accurate job pricing. Latitude 41 calculates the average man hours for each property at the end of each season. Crew Control helps them assemble that data and reevaluate hours on each job and its pricing to understand which jobs were priced profitably and which weren’t.

The company uses automated text notifications to alert clients to upcoming services—and this feature proved to be a selling point when it came to recruiting a new fertilizer technician. The technician often had struggled with clients who were not clearing their lawns before fertilizer applications. The ability to use the notification feature to remind them of their lawn applications, and to see the fertilizing schedule at a glance was crucial to signing the technician and offering fertilization as a new service.

Previously, Latitude 41’s estimators struggled with handling leads, scheduling time to look at projects, and managing details like project photos on their phones. They solved that issue by creating an estimating crew in Crew Control, which also helped them organize customer notes and photos and connect them to the correct customer in the database.

Looking ahead, Latitude 41 has teamwork on the brain and wants to “keep growing, continuing to be more profitable,” Austin explains. And the company isn’t resting on the growth it achieved in 2021, even though it beat his big goal of $1 million. “We want to make sure we're essentially maximizing pretty much every single dollar that we can make and keeping guys busy and keeping money rolling in. Crew Control's a huge part of that. It's all a team effort,” he says.

“There's no way we would've gotten to as big as we are right now without Crew Control,” he adds. “And there's no way that we would be able to make the money that we are without it. It's been absolutely huge and essential for our growth.”