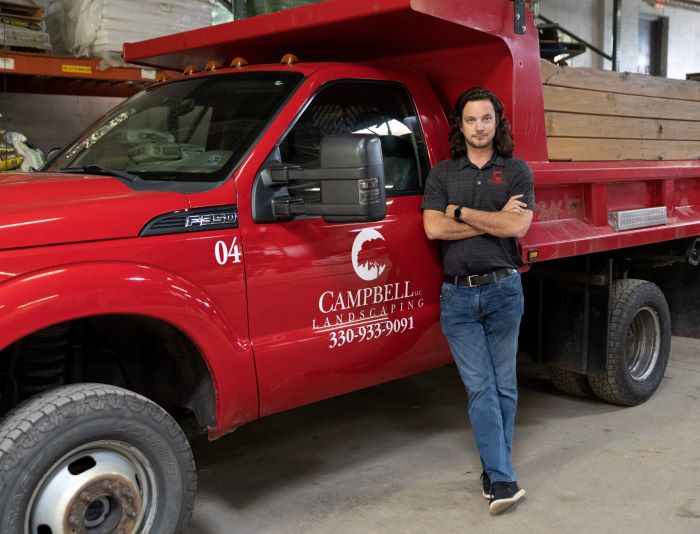 Andy Campbell knew from the beginning of his landscaping career that software is crucial for a company’s success and growth. His college internship at a commercial maintenance firm showed him the importance of a software solution to track operations. He knew it was a must-have when he started his company, Campbell Landscaping, in 2015.

But it would take him years and several attempts to find the solution that would ultimately work for his team.

Campbell Landscaping, based in North Canton, Ohio, has a revenue of approximately $2.5 million, with half commercial/homeowner association clients and half residential clients. The company provides landscape maintenance, installation, enhancements, snow, irrigation, and lawn care services.

The team used several methods to track data in his company before Aspire, including paper work tickets and various software platforms. Frustrated with these disconnected processes, Campbell’s operations manager implemented LMN as their new software.

Campbell previously tried LMN and wasn’t convinced it was the right solution. Even after his operations manager trained the staff and they began running their business on it, he remained resistant.

“I didn't like it—I thought it was incredibly cumbersome,” he says. “I knew we would outgrow it at some point sales-wise. If you care about job cost, and you care about your numbers, clear data, and have multiple crews, it’s not the ticket,” he says.

At the time, the company was approaching $1M in revenue and was working with landscape business consultancy The Grow Group.

“What was funny because (The Grow Group) told me not to switch because we were under a million dollars. They said, ‘No, you can ride it out for a little while longer,’” he recalls.

He continued to push back. “I'm not saying I couldn’t have implemented it better, but I always knew that it was not my forever (software), so I wasn't willing to invest the time in it.”

Campbell chose Aspire because it was a complete system his team could grow with, plus he liked the company's culture.

“Aspire has a growth mindset—they’re very big-picture,” he says.

Over the past two years with Aspire, Campbell Landscaping has grown by 20% yearly.  The growth results from streamlined workflows and better reporting with the platform and guidance from industry business consultants.

Aspire’s ability to help companies create efficiencies that build growth was a central selling point for Campbell—and the benefits didn’t end there.

Previously, Campbell ran his company using a combination of LMN and QuickBooks. He created estimates in QuickBooks, generated the corresponding work tickets and labor management in LMN, and then reentered financial data in QuickBooks for accounting and invoicing.

Campbell estimates spending four to eight hours each week re-entering the same data and using workarounds to connect accounting and labor management. He also handled change orders on a job by creating a new estimate in QuickBooks and additional work tickets in the software solution for his crews.

“I used the software as a very expensive timekeeping and work ticket program,” Campbell says. “I'm not the most organized person in the world, and most of my work focused on ensuring details were merely accurate for the crews.”

In Aspire, Campbell and his team can follow a standardized workflow from estimate, scheduling, purchasing, and crew management to invoicing and payment. Campbell also appreciates how the platform enforces better workflows to yield more accurate data.

“What I love about Aspire is that it's tough to work around unless you say, ‘I'm not going to worry about any accounting. I'm going to do my own QuickBooks still, and I don't care what our P&L says,’” Campbell explains.

“It forces you to do it only one way—you can't even add a work ticket if it's not connected to an opportunity in the system,” he adds. “It never allows you not to be organized.”

A straightforward approach to overhead

Campbell took issue with how LMN calculated overhead on each job, specifically, how the system required an account manager to allocate all the necessary equipment to a work order to create the estimate.

“I thought, ‘This is crazy. You're never going to be able to think of everything you need on every job.’ There are just too many opportunities for error,” he says. He prefers Aspire’s more straightforward method of creating overhead work tickets for the entire month rather than having to account for all overhead variables on each job.

Campbell’s team appreciates the real-time reporting of jobs, and now they can trust the data and use it to inform and educate their decisions. The estimating feature is valuable to Campbell and his team because they now have:

We've become much more profitable,” he says. “From last year to this year, we've added two points to our gross margin, and that came from dialing in pricing, estimating, and ensuring our pricing was appropriate for our profit targets.”

He says it’s a huge positive in a year of significant inflation and escalating fuel prices—plus, the growth has the team in a better position to work more efficiently and review financials with more clarity.

The implementation process drew Campbell to Aspire. “I know what it takes to implement software, and I wasn't looking to do it again in five or ten years,” he says. “That was very important to me, that whatever I chose had longevity and was going to be around.”

Campbell and his team developed a rapport with Mike Boeringa, their Aspire implementation manager, as Boeringa guided them through entering their data into the platform and learning the system.

“He knew our company during that whole implementation process, and he got to know how we did things, the services we offered, and would provide advice on how to set up the software,” Campbell says.

After implementation, Aspire customer success managers and AspireCare representatives took over handling Campbell’s questions about the software. “The customer support at Aspire is in a completely different league,” he says. “I don't think I ever talked to the same person at LMN more than a couple of times.”

With his previous solution, Campbell had ‘unlimited support,’ which consisted of scheduling phone calls with customer care. He rarely had the same customer service representative.

“Nine times out of 10, they just pointed you to watch a video,” he says. “I don't know how you can implement software to run your entire company by setting it up with YouTube,” he says.

Campbell says managing growth and people are the two most significant stressors in his job. Fortunately, unlike many landscaping companies, his firm is fully staffed, but his main concern is supporting his team in the best way possible so the company can grow.

Technology provides processes and automation that, if implemented and used correctly, can help companies scale. But even the most effective and sophisticated software solution becomes just another waste of time and money if your team doesn’t embrace the change.

“As long as everybody uses Aspire correctly, everybody should have all the information they need to do their job,” he says. “Now I can manage growth because I can see real numbers and ensure we have accurate data and are quoting things properly—profit, job costing, etc.”

He says that many of his team members who have used both solutions are extremely happy with the switch and his newer team members are all-in on Aspire. “Since we switched to Aspire, it was not, ‘Are we sure we like this? Should we look for something else?’”

“We don't talk about other options, and I never have,” says Campbell. “It's part of our culture.”