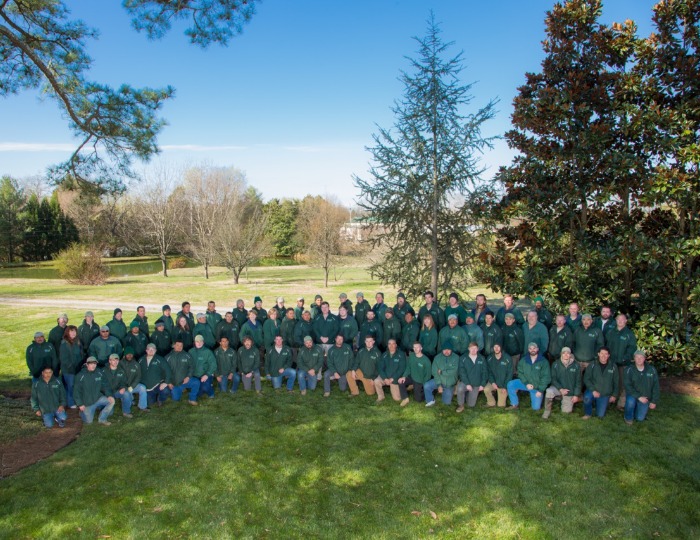 For his first 20 years in business, John Puryear had the final say in every decision for his landscaping company.

That all changed seven years ago. A life-threatening medical emergency made Puryear realize that his self-described “paternalistic” approach to management wasn’t sustainable. He had created a successful business in Puryear Farms, but it wasn’t set up to function without him.

“It made me realize that if we’re going to have a successful business with people who consider this to be a career they can retire from, then they should never live in fear of what happens to the owner,” Puryear says. “Any business should be able to lose a key player, or two key players, or the owner and continue to operate without missing a beat.”

Loosening the grip isn’t easy for any entrepreneur who’s grown their enterprise from the ground up, but Puryear found a way to do it.

The result? An even healthier company culture that has made Puryear Farms a business that landscape professionals want to work for, and customers want to work with.

Find out how Aspire Software can help you scale your landscape business. Schedule a free, customized demo today.

The 100 acres of land Puryear Farms sits on today has been in the family for generations.

John Puryear’s original plan was to run the family farm after finishing business school at the University of Tennessee, but he was counseled against it. Instead, during senior year, he was introduced to horticulture.

Over the past 30 years, they’ve grown the landscaping business into a thriving operation that employs over 75 people and serves a large portion of Middle Tennessee. Their clients are mostly commercial, and work is divided evenly between maintenance and construction.

“That’s a dream for any father,” Puryear says. “I’m like the coach whose son plays on the team—I’m probably harder on him than anyone else, but he understands why.”

Puryear Farms maintains part of its original identity with an on-site nursery (the original name was “Puryear Farms Nursery”). Although Puryear quickly realized most of the company’s revenue would come from landscape services, the in-house nursery provides them with an interesting niche and supports relationships with developers who need to plan for trees several years in advance.

After growing the nursery and landscaping business successfully for over 20 years, Puryear found himself faced with a new challenge: his health. Seven years ago, a life-threatening medical condition caused him to stop and reflect on his management style—and he decided to make some changes.

“It was at that point we really restructured the business,” Puryear says. “We changed our way of thinking, shattered the paternalistic culture, and moved toward a collaborative decision-making culture.”

While Puryear Farms was successful before, the transformation led to an even healthier and more productive culture that retains both customers and employees.

Instead of every decision running through Puryear, responsibility is now distributed among multiple key players. They have five weekly meetings to ensure healthy collaboration between each area of the company.

“I believe the biggest disconnect that develops in any company as they grow is between operations and sales,” Puryear says. “You can imagine all of those points of friction that exist between those two departments, so we have a process for handing jobs off.”

The roles at Puryear Farms are highly specialized. Salespeople focus on selling, and operations people focus on managing projects. To make the process as smooth as possible, they have a series of regular meetings that allow staff in both areas to ask questions and gather all the information they need to execute their work effectively.

“Even if we’re specialized and we’re in our own little fox holes, we need to be aware of the bigger picture,” Puryear says. “And that can only be done with good communication, which is achieved through processes.”

“You can grow a business really quick and without the processes in place (or get ahead of your processes), but you’re just asking to run off the rails,” Puryear says. “We’ve always believed that stable, steady growth is the way to go.”

He says the upper limit of growth for any fiscal year is 20%. After that, it’s too hard to manage responsibly.

One of the tools that has enabled Puryear to scale effectively is Aspire’s landscape business management software. With real-time insight into all their data (from estimates and scheduling to purchasing, invoicing, reporting, and more), Puryear Farms has improved the quality of their estimates and brought job costs to within 5% of budgeted hours.

“Prior to software, there was a lot of educated guesstimating going on,” Puryear says. “And the bids going out the door could vary tremendously from one salesperson to the other.”

In one instance, Puryear recalls speaking with a customer about a maintenance quote. While on the phone, he realized she’d requested a quote six months earlier. After asking if she still had a copy, she responded that she wanted the job requoted by a specific salesperson because she’d heard his proposals were cheaper.

“I knew we had a problem right there,” Puryear says.

Getting consistent systems and bidding kits set up by Aspire put an end to that unfortunate situation.

It’s not always about the customer

Puryear Farms has grown from a single-truck operation to a multimillion-dollar company with over 75 employees. They did it by providing exceptional customer service, but for Puryear, it’s as much about the employees as it is the clients.

“Our vision is focused 50/50 on customers and employees,” Puryear says. “One without the other is useless, and I see too many vision and mission statements that are focused entirely on their outward actions toward customers.”

He believes in providing growth opportunities for employees and creating an environment where someone could spend their entire professional career. And some do—approximately one-third of the current staff has been with the company for over 10 years.

In addition to instituting distributed decision-making structures, Puryear encourages staff engagement by meeting quarterly with an employee council—three team members from anywhere in the company nominated and elected by their colleagues. Breakfast meetings with the council have led to productive (and sometimes challenging) conversations and changes based on employees’ experience.

They also host monthly staff appreciation events and have recently created a buddy system to help new hires get connected.

“The one common thing I hear from customers all the time when they meet me on the street is, ‘You have the nicest people,’” Puryear says. “That makes me proud.”

The power to scale

John Puryear built a thriving landscaping company based on a solid set of core values, a commitment to professionalism, and a willingness to invest in the infrastructure needed to scale efficiently.

Interested in learning more about how Aspire can help you achieve the same kind of growth for your landscaping business? Sign up to receive a free, personalized demo today.